The Japanese taxi industry is offering new services to foreign tourists to help them enjoy Japan as much as possible. Tokyo Taxi Center that manages taxi cabs travelling in the Tokyo metropolis has increased the number of hospitality taxi cabs driven by a driver who can speak English. When you get out of the international terminal of Haneda Airport, you can find a hospitality taxi cab. In addition, one-box taxi cabs that transport more than five people are also available. A taxi company in a sightseeing spot has already made it mandatory for its drivers to learn English conversation.

In Kawagoe of Saitama Prefecture, taxi drivers carry a sheet on which taxi fare and the explanation of the destination are described in foreign languages. Drivers respond to questions from tourists by showing the sheet. At the same time, the number of taxi cabs that allow the driver to settle the payment by cash card in his car is increasing. The Tokyo Olympics is approaching, and Japan and all the Japanese people are working out various actions to hospitalize all people from every corner of the world.


Hospitality provided by a taxi driver
the grass-roots activities

Enjoy the scenery showing the discipline of
Japanese taxi dirvers

Posted by Senryaku-kenkyu at 5:41 PM No comments:

The current government is in the middle of cabinet reshuffle, even though it started several months ago claiming “right person for the right place.” Seeing the departure of several incompetent ministers, Japanese now realize that the ruling party is in short of excellent human resources. Absorbed too much in factionalism, current leaders seem to have missed the duty of developing human resources. Shigeru Yoshida, unquestionably Japan’s greatest postwar politician, left such excellent leaders as Nobusuke Kishi, Eisaku Sato, and Hayato Ikeda. Developing human resources is a toilsome and time-consuming job, but it is one of the most important duties that a leader has to perform. Several months ago, it was clarified that the president of a leading paper mill company had donated as much as 10 billion (not million) yen to gambling establishments in Macau in secret for nothing. He is a grandson of the founder of this company. Shinpei Goto, a great politician from the late 19th century to the early 20th century, gave an excellent lesson to his successors. He said, “Leaving money is the worst, leaving a company is in the middle, and leaving human resources is the best.”
Posted by Senryaku-kenkyu at 5:26 PM No comments:

No. 13: Ongoing and endless discussions on nuclear power generation (December 29, 2011)

In Japan, there are still ongoing and endless discussions on what Japan should do with nuclear power generation. As a matter of fact, Japanese are very fond of discussing an issue that does not have a correct answer. The discussions always end with no consensus, and the only agreement is that lots of more discussions are necessary to find the right solution of the issue. The opponents resort to sentimental argument, while the supporters emphasize the safety and reliability of the technology. It is totally out of the question to focus on sentimental argument in this issue. Doubtlessly, Japanese and people on the earth alike sympathize with the victims of the disaster on March 11, 2011 with no exceptions. However, the fact remains that we cannot go back to the past. The more affluent a society grows, the more energy it needs. It is very simple and clear. A diet member told, “We should ask all the Japanese people on what Japan should do with nuclear generation.” National ballot? What can we learn from the national ballot? A national ballot will create another endless discussion on a nationwide scale. Diet members are representing the opinions of Japanese to avoid endless discussions of this kind, aren’t they?
Posted by Senryaku-kenkyu at 7:27 PM No comments:

The Japanese government is still unsuccessful in formulating decisive and effective policies on how to get involved in the Trans-Pacific Partnership (TPP). All diet members and Japanese alike share the same opinion that it is necessary to make the domestic agriculture industry stronger. Nonetheless, diet members fail to reach an agreement on Japan’s direction toward the TPP. The turmoil can be attributed to the declaration of Prime Minister Yoshihiko Noda.

He declared, “The Japanese government will start negotiations with the countries involved to start discussions toward the participation in the TPP.” This rather unintelligible declaration caused the current stalemate. The Japanese government does not take his declaration as an official decision to participate in the TPP. What on the earth is his attitude, yes or no? The answer is between the two. As is often the case, no breakthrough can be found for this stalemate. A strange equilibrium exits between the supporters and opponents.

Because necessary measures and policies depend on future progress, both parties are very cautious about taking concrete actions. However, the Japanese government should not forget that it formulated only follow-up measures in the Uruguay Round (1986-1993) under the slogan “Do not allow foreign rice to come to the Japanese market” and wasted a 6 billion yen budget. The present Japan’s top leader does not seem to take a risk, as is often the case of a leader with excellent academic records. It should be noted that excellent academic records are merely one of the prerequisites to be a top leader.
Posted by Senryaku-kenkyu at 7:33 PM No comments:

Роsatom, Russia’s government managed nuclear company, will come to Japan with its nuclear technology. Under the initiative of Prime Minister Putin, the state company wishes to establish business relations with Japanese leading companies in the nuclear business and plans to participate in the operations in the devastated Fukushima nuclear power plant. Once upon a time, we Japanese had an easygoing prime minister claiming proudly that Japan should abandon nuclear power generation and focus only on renewable energy. Time passes very fast. While Japan had barren and wasteful discussions on what Japan should do with nuclear generation, other countries are developing nuclear technology very fast. It is necessary to make strenuous efforts for one year to make up for a loss of half a year created by negligence.
Posted by Senryaku-kenkyu at 1:17 AM No comments:

The current headline news in the Japanese baseball world is not a battle between baseball teams on the ground but an internal battle between owner and manager of a baseball team in the office over the team’s future lineup. In the sports business, you can find this kind of battle quite easily. George Steinbrenner of New York Yankees may be the most famous figure. The Japanese manager in question seems to be too proud to succumb to the owner and try to be a hero. Most Japanese understand the manager and have some uncomfortable feeling about the attitude taken by the owner. But that is the way the world goes. “Rio Bravo”starring John Wayne is a movie. The reality is what you see in “High Noon” starring Gary Cooper. Do not try to be a John Wayne. The manager had better keep in mind what Gary Cooper said in the movie. He said, “It’s crazy!”
Posted by Senryaku-kenkyu at 4:54 PM No comments:

The price of a residential photovoltaic generation system has been decreasing in Japan because of the inflow of low-priced products from Europe and China. The industry sources are much concerned about the decreasing profit of domestic makers. They say that the average price of a system dropped to 529,000 yen per kW lately, an 8.5% decrease from the previous year. Because a solar battery module accounts for 50% of a photovoltaic generation system in cost, countries capable of building solar modules cheap naturally have a strong competitive edge. However, you need to think about the background of the inflow of foreign products. European countries including Germany reduced the support for the introduction of a photovoltaic generation system. Actually, the world market is estimated to decrease 20% in 2011 from 2010. Then, Japan is a rather promising market because it will enact the system to buy whole amount of renewable energy next year. In a word, the policy to enhance the happiness of Japanese people ends up with the decreasing profit of Japanese makers and makes the domestic economy even worse. What an irony this is.
Posted by Senryaku-kenkyu at 5:48 PM No comments:


Quick reference of this blog 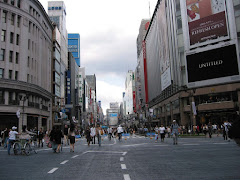 The Ginza district in Tokyo